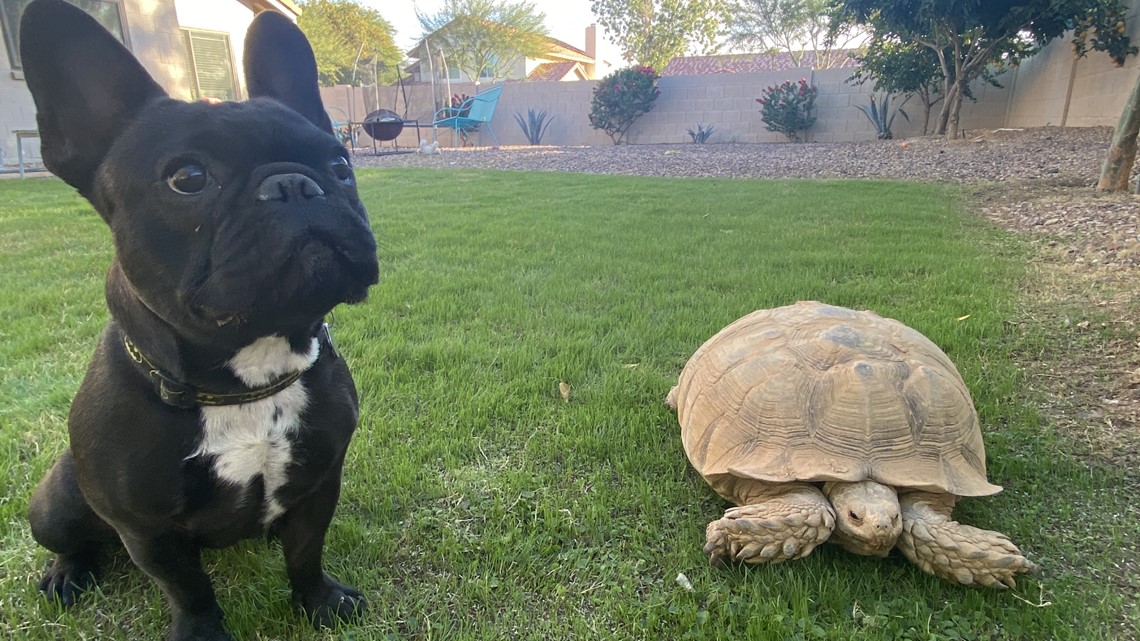 A dog and a turtle were trapped underground. Here is what happened

With the help of firefighters and a herpetologist, a Scottsdale family’s pets were rescued.

SCOTTSDALE, Arizona – Most would never think Bruce Wayne could be trapped underground and would need firefighters’ help to escape.

But that was the case on Sunday at a Scottsdale home.

Except it wasn’t Bruce Wayne, the bat-clad action hero who protects Gotham City who needed help. It was Bruce Wayne, a French Bulldog, who got stuck in a tough spot.

Over the weekend, the Scottsdale Police Department became the superhero after saving a Scottsdale family’s dog, Bruce Wayne, from being trapped in the underground burrow of their pet turtle, Bianca.

Michelle Fortin believed that a crime had been committed in her home. She couldn’t find Bruce Wayne anywhere and assumed he had been robbed from the backyard because there was simply no way he could have gotten out on his own.

She immediately took to social media, alerting locals to keep an eye out for Bruce Wayne, who was wearing a Batman necklace.

It wasn’t until Fortin heard faint barking from the ground that she realized what had happened.

Apparently Bruce Wayne crawled into Bianca’s burrow and got trapped after the turtle chased him and didn’t move.

Having no experience in situations like this – because how often does a turtle trap a dog underground – Fortin called the local fire department … who also didn’t know what to do. .

RELATED: How Many People Does It Take to Get a Horse Out of a Hole? (Hint: a lot)

According to Fortin, the burrow was about eight feet deep and the animals were too low to be reached by hand. The firefighters did not want to dig because they feared the burrow would collapse.

Fortin got emotional at one point when the fire captain turned to her and said, “We’re going to do what we can to give the dog the best chance.”

Fortin believed that she and her children would witness Bruce Wayne’s death.

A breakthrough eventually came after firefighters called a herpetologist, who is an expert on amphibians and reptiles, who advised the crew on what to do next. After carefully digging and removing the roof of the burrow, Bianca came out.

After Bianca was taken away, Bruce Wayne then appeared unharmed.

A happy ending was the result of a very unique situation, and all it took was a fire department, a herpetologist, and a stressed out mom.