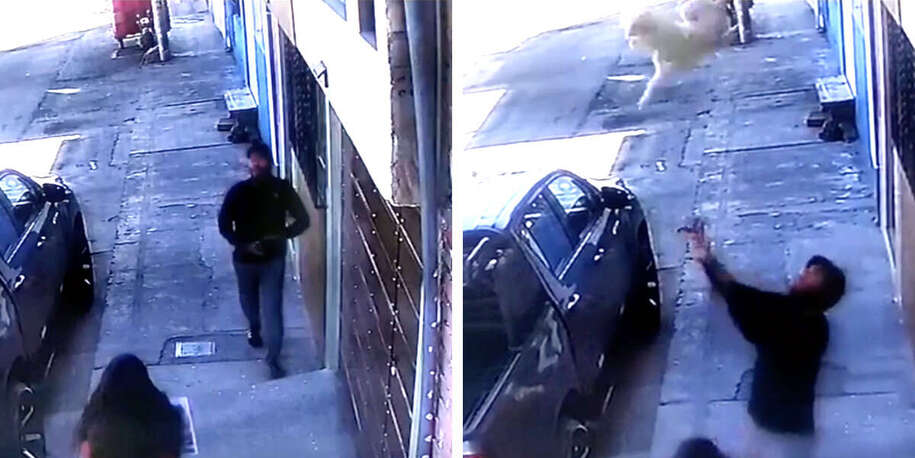 A man catches a dog that has fallen from a high roof. And another climbs a 13-story ledge to save one more

Peruvian John Alexander Palomino Bendives had just returned home on Wednesday the 6th after a two week stint on the pitch, eager to relax a bit and get some rest.

He had just picked up his girlfriend and they moved back to the apartment John shares with his mother and their four dogs.

Their apartment is on the roof, and his arrival did not go unnoticed, because all the dogs, including Mina, were looking over the railing, delighted to see him home.

Having either lost her balance and slipped, or misjudged the distance, Mina began to fall into the street below.

(the only video is in Spanish, however……

says John, “She was fine, unharmed. Mina was happy and grateful, as you can see in the video. She kept wagging her tail with joy.

We install a mesh barrier on the roof so that they can continue to sit there, but without risk of falling.

I love my pets very much. They always receive me with a lot of love and emotion. The time I spend at home, I try to spend as much time as possible with them.”

But rivaling and even surpassing that bit of heroism happened in Bogota, Colombia.

Diego Andrés Dávila Jimenez was carrying out work in his 13th floor apartment which he shares with his mother and his dog when he heard a commotion outside and looked out the window.

It was from a crowd below watching in fear.

His neighbour’s dog, Luna, had slipped between the balcony bars and was hanging only by his hind legs.

“People on the ground were screaming. They had a mattress out just in case.

The truth is that I did not think of the disastrous consequences. I didn’t look down.

When I had Luna in my hands and looked down, a thousand thoughts raced through my mind. My girlfriend was a little pissed off, yelling at me, ‘Stay there! Don’t come back down!”

After Luna’s mother returned home, “she was in tears. She’s so grateful, because she loves this dog.”

Even after being hailed by almost everyone, Diego didn’t come out unscathed.

“I received a lot of scolding from my mother.

David Ross stayed at the ‘deathtrap’ Watch House in Coverack, Cornwall, with his wife Suzanne and 80-year-old mother Gloria, having paid £2,727 to stay for a week.