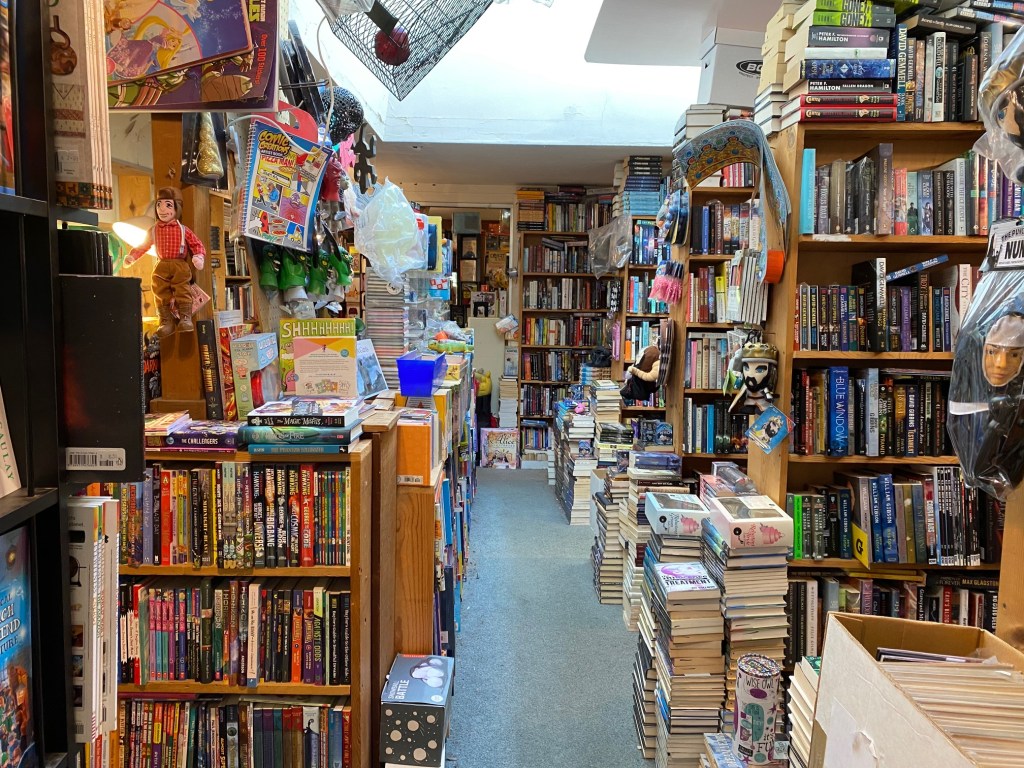 Alliee DeArmond, in the spirit

I reached into the bag and pulled out “The Business of Heaven”. A collection of passages from the many writings of CS Lewis, the book is organized into dated and daily readings. I go back to March 6. “People say the Church should give us an advance,” the paragraph begins. He then explains that if by “the Church” they mean all Christians working in their particular areas of expertise to get God’s will done, then it is true. However, if what they mean is that the clergy should put in place a political program. . . well, “That’s silly.”

It felt so true and wise to me that I bookmarked and added “Heaven’s Matter” to the pile by my evening chair. Then I went to the paper bag and pulled out “The Herb of Grace” by Elizabeth Goudge. I sat down on the couch to watch him. Over 50 pages later, I discovered a quote I had written in a spiral notebook over 30 years ago. Given the proliferation of notebooks that followed, the occasional search for that vaguely remembered quote had not always been successful. “Women make the bricks that create the wall against the flood of evil. . . there is no point in weakening yourself for the manufacture of bricks by thinking too much about the deluge.

I grabbed a snack and settled myself deeper into the sofa – and the book. “The Herb of Grace” tells the story of an English family who buy a country house immediately after World War II and slowly discover that it was a pilgrims’ inn, a guesthouse run by medieval clerics centuries before.

Bags, boxes and books: My son’s church in Woodland has a parsonage — a three-bedroom house on the property where the priest could live. The marvelous old Tudor house overlooks the church and a maze on the green. As priests increasingly chose not to live there, the community began to rent it out. Eventually, they extended the spirit of hospitality by making The Parish House available on Airbnb for visitors and travelers passing through the Sacramento area.

My son suggested that I help him become more of a retirement home. Studying photos posted on Airbnb, I discovered that the living room had floor-to-ceiling bookshelves along the back wall, as well as two bookcases framing the fireplace. The mostly empty shelves held a scattering of Reader’s Digest Condensed Books, a bunch of Clancy’s (three copies of “A Clear and Present Danger”?), a row of Daniel Steel, and a nice bundle of children’s books.

Yes, I thought, I could definitely make this more retirement-ish. Four boxes of books by a recently deceased friend cluttered the floor of my guest bedroom. They included books on prayer, healing, grief, spiritual formation, and scripture. Other leftover boxes from my library joined the fray. I have to work.

The Experience: When organizing the books, I considered other Airbnbs with many books I had stayed in. If you only stayed a few nights, you couldn’t finish a book you started. It was like being given a box of chocolates that you couldn’t eat.

What if we allowed people to take a book to The Parish House? It would be an interesting experience. Would people pick up a book? Did they abuse the privilege? We put instructions on the shelves and in the all-important binder. Yes, you can take a book.

Dangerous Journey: I had a great time arranging books at the parish house and gazing at the church and labyrinth in the first light of dawn. Back home, I admired the long invisible rug in my guest room.

The first sign of danger was when I went to the La Selva library to pick up a waiting book. Of course, I looked at the books on the Friends of the Library sales shelf. I chose “Under Tuscan Sun”. Yes, I had already read it, but it could be good for The Parish House. “Oh, two for a dollar?” I grabbed another book.

Next time, three good books I had already read were on the library sale shelf, along with a David McCulough someone would surely like. The librarian gave me a bag to take home these books with the couple I had picked up at the library. I put the bag in the guest room.

I was not concerned about the replacement of books that people might take from the parish house. I had asked the members of my monthly literary evening to bring a good book for the shelves of The Parish House. Plus, I could always thin out the books that filled huge, overcrowded shelves in every room of my house (except the bathrooms).

During our literary festival in February, a friend gave me two books. “They go together,” she says. Another friend announced she was giving “Herb of Grace”. He was sitting in a sack near his front door – obviously gathering friends. Eventually this bag ended up in my guest room as well.

I have known for a long time that books do things overnight and multiply. I think I may be in big trouble.

Other: Like the parish house of St. Luke’s in Woodland, All Saints Church in Carmel has the Julian of Norwich Retreat Cottage. It could become a thing. How does your faith community use its extra space?

End of quote: “No one who can read can ever clean out an attic. —Anne Landers

“In the Spirit” airs once a month in the Sentinel. Contact Aptos resident Alliee DeArmond at [email protected]