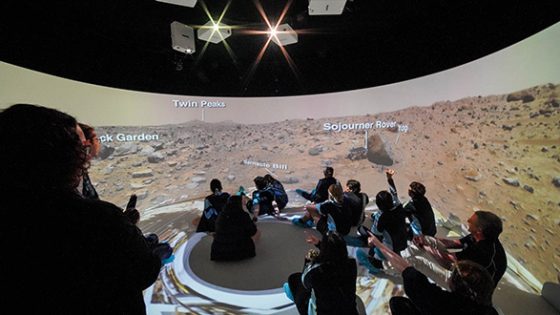 The first full 360° Igloo cylinder to add floor projection is now in use at an Australian university.

The floor projection was added as an upgrade to a previous installation at a science education center based at Swinburne University of Technology.

The six-meter 360° immersive experience was first installed with wall projection only. But it was designed to allow easy upgrades down the line.

The Igloo Cylinder was provided by vendor Igloo Vision and is powered by the company’s Immersive Media Player and Igloo Enterprise software.

It is located at the KIOSC (Knox Innovation Opportunity & Sustainability Centre) which is a partnership between a consortium of secondary schools and the university located in Melbourne.

KIOSC, which has 3D printers and robots among its STEM facilities, provides students with learning experiences that would otherwise not be available to them.

Its immersive room enables shared learning – without headsets creating barriers between teacher, students and their peers.

One course that benefits from the Igloo is a forensic science program for 9th and 10th graders. In this course, students are briefed on a case with actual news footage, don a forensic suit, and then begin their investigation.

KIOSC created its own images recreating the crime scene in the Igloo. There are photos and footage that can be viewed before the investigation moves into a science lab. There are also recreated interviews with six suspects. The students have until the end of the day to solve the case.

The Igloo is also set to be used as part of a Mission to Mars program, where it will show a panorama of Mars created by NASA’s rover.

Commenting on the immersive Igloo room, a KIOSC staff member said, “Teachers and students all find it great. Everyone wants to be there all the time. We also hear from other university departments who want to come in and use it. It’s amazing for students, even if they’ve tried on a helmet, to step inside the Igloo and be surrounded by the contents, no matter what they look like.