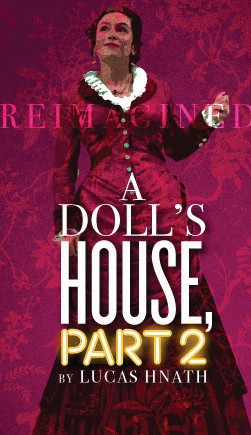 Florida Repertory Theater’s 2021-2022 season continues with a revamped re-mount of its 2020 production of Lucas Hnath’s “A Doll’s House, Part 2.” The play was due to open in March 2020 but was closed just a day before seeing its first live audience. The 2022 staging reinvents the ArtStage Studio Theater production.

When the pandemic ended production in 2020, Florida Rep offered a professionally filmed version for online streaming. The virtual production caught the eye of the late drama critic, Terry Teachout, who counted Florida Rep “among the best” regional theaters in the country, and said his direction of the play “rises where the original Broadway production stumbled”.

The Tony-nominated play is a contemporary sequel to Henrik Ibsen’s now classic work of modern drama, “A Doll’s House,” and picks up 15 years after Nora Helmer closed the door on her marriage and family. What happened next to the iconic heroine? This bitingly comedic sequel imagines her knocking on the door she so famously slammed more than a decade earlier. Now a successful writer and independent woman, a skeleton from her past drives her home to ask her ex-husband for help. In this clever and sophisticated new play, Nora discovers that the family she left behind, including her long-suffering maid, have choice words upon her unexpected return.

Boyle is a longtime member of the ensemble whose work at

Florida Rep includes “Outside Mullingar”, “Vanya and Sonia and Masha and

Spike”, and many more.

“A Doll’s House, Part 2” is sponsored by Bruce and Janet Bunch.

Performances are Tuesday through Saturday at 7 p.m., Thursday, Saturday and Sunday at 2 p.m., and 8 p.m. on Friday, February 25 for the opening gala. ¦

This Lake Union houseboat costs less than $500,000 and is utterly cute