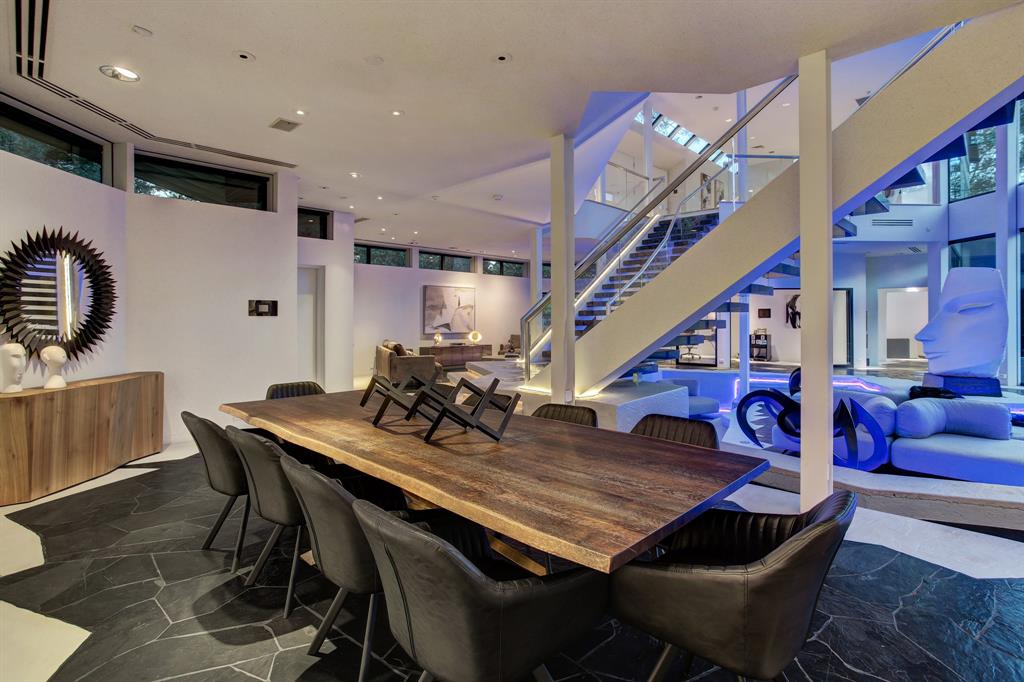 The internet’s favorite “Star Wars”-inspired Houston home is back on the market for $3.7 million.

Dr. Jean Cukier had 3201 University Boulevard built in 1992 and requested a home that looked like a stealth fighter jet, according to the Houston Chronicle. The “House of Darth Vader”, as it has been aptly dubbed, looks like it could take up space at any time with its dark stone and metal roof.

Visitors are greeted by a pair of large, floating staircases that draw the eye upward, as well as windows that stretch to the ceiling. A sunken living room is directly behind the stairs. Randy Hickey, an architect who worked on the house, told Texas Monthly that it was meant to mimic a canyon. The canyon resemblance continues throughout the home with its jagged black stone floor inlaid with white concrete. Two garden beds, where snake plants currently grow, line the sides of the living room. LED light strips illuminate the area, creating a floating sensation.

Viewing the dark exterior of the house from the street makes it look like it might look like a cave. But instead, tinted windows cover the entire rear of the structure, letting in light but providing privacy from the outdoors. The custom pool and waterfall add to the viewing pleasure in the already impressive living space. The canyon influence continues in the kitchen where the stone countertops have been hand-hewn and indented to look like tombstones, reports Texas Monthly.

With four bedrooms and five bathrooms on 7,040 square feet, this home could accommodate a family, but a bachelor might be a more ideal fit. After all, the master suite offers little privacy. A second floor loft overlooks the bedroom and the bathroom is tucked away behind a half wall. The bathroom is the epitome of futuristic chic with a urinal hidden behind what looks like a cabinet door and floating granite countertops. Two walk-in closets and a built-in chest of drawers offer plenty of storage space.

The second floor of the house has three guest bathrooms, a living area and a large balcony. The house was last sold in 2021 by its original owner, Dr. Cukier. The current owners “have admired and loved the property for years,” listing agent Nicole Handy said via email. “They considered the house to be one of Houston’s most iconic homes. However, they have now decided to allow someone else who loves the house just as much to own the house.”