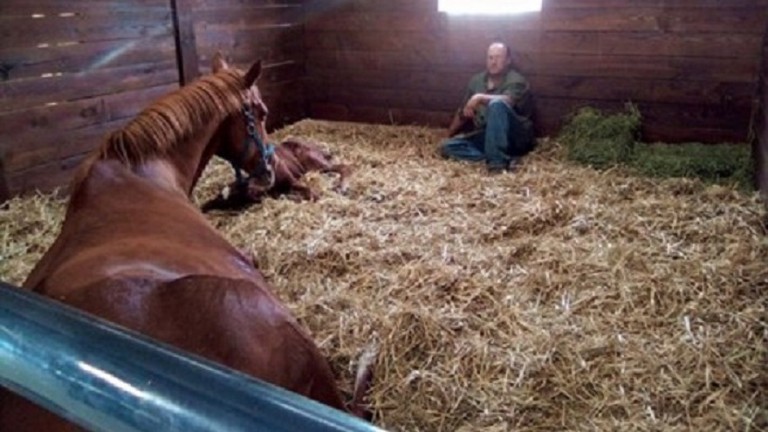 When Audrea Dyer foaled on St Patrick’s Day foal of his mare Humorlee on On January 25 last year, she had no idea of ​​the events that were soon to take place, making the now burly bay colt named My Last Lea a family project. The colt was to be Humorlee’s last colt, who died just 24 hours after foaling.

The yearling colt is presented by Abbie Road Farm (Lisa McGreevy) as Hip 151 and heads to the ring on Tuesday as part of the select group of yearlings at the Ocala Breeders October Sale.

“We were sort of window shopping and watching the sale,” Audrea Dyer said. “When we saw this gorgeous chestnut mare step into the ring I looked at her page; I used to work for Riley McDonald at Eaton Farm and Sales for several years. I remember selling yearlings from Humorlee and I recognized the page. She caught my eye, I had never seen the mare, but I had seen her babies before.”

Dyer continued: “We looked at the page and didn’t think we’d be able to afford it and it would be out of our price range. The catalog page said it was full of Goldencents., but she got in the ring, had an abortion and was open; no one wanted or bid on her.”

The couple sent the mare to Florida’s St Patrick’s Day freshman bull, along with a few other purchases they made at the OBS sale that winter. Humorlee was confirmed in foal after a breeding and continued to carry the colt without incident until foaling. Producer of eight starters including six winners, she was to see Bernardini for the 2021 breeding season.

Dyer said: “After the mare foaled she wasn’t quite 100%. She was a bit off and laid back and calm. The foal was nursing and she was looking after him. He was fine, was a little bit slow to suckle, maybe not the most dynamic thing in the world.

“Later in the afternoon, she started to [show concerning signs]. We had the vet come and watched her carefully, doing what we could, but she was not a candidate for surgery.”

Unfortunately, Humorlee had a hemorrhage and had to be euthanized when her foal was only 24 hours old. This all happened during the January OBS sale. Dyer’s husband was already planning to go shopping, so she set to work finding a bottle for the orphan foal on the farm.

“I was calling everywhere trying to find a nurse mare,” she said. “We received a call from someone who had a recipient mare whose foal had died two days before; she was full of milk and crying for a baby. We tried to graft the foal to her, but unfortunately she didn’t want anything have to do with ‘Lee’.”

Quick thinking led Dyer to try filling an Igloo cooler with milk replacer and fitting it with plumbing for a nipple, simulating nursing a mare.

Dyer said: “Everyone asked, ‘How did you teach him to suckle from the cooler? I had a bottle in one hand and the Igloo in the other hand, and I moved the bottle into the Igloo, and he started sucking on it. And that was it, the cooler became his mother.

She would go out with the foal and return with him to the stall, filled every four hours with warm milk at first. Outside, the lone colt was paired with another mare and foal, quickly becoming friends with his paddock mate.

“It was so cute; at 2 a.m. I was going to the barn with a jug of milk, and he was screaming and panting, getting all excited because his fresh milk was coming,” Dyer said.

“He lives in the first stall of our barn and we have big windows in the back of the house. Every day when you open the door and walk out the back door of the house, his little nose sticks out of the window while snoring. over to you, waiting for her milk.

“Even now, as a yearling, he’s in the same stall, and if you’re ten minutes late for your feed and out the back door, he’s over there screaming for dinner.”

When ‘Lee’ was about ten days old, he began being sidelined with another mare and her foal who were born the same night. The two colts became playmates and friends, so the colt was bred as much as possible like a normal horse.

While the colt has become part of the Dyer family, the plan has always been to send him into the sales ring. The January colt has turned into a solid looking colt, who is currently going through a growth spurt.

Dyer added: “The little nose that looks at us every day will be sorely missed, but he’s grown into a really big, strong yearling. No one would believe he’s an orphan.”

The Dyers, who have around 13 broodmares between them and their clients, will be delighted to see the colt walk through the ring, but are also ready to take him home and campaign him under their Ever Blue Farm banner if he fails. not reach his reserve.

Dyer said: “I think he’s a pretty good horse, and someone with a little more means could probably send him to a better trainer than us. We thought being a Florida horse we would do better sell it here at OBS on day one.

“Our main intention is to raise to sell, but anything that doesn’t seem to come down the track or if it falls through the cracks, we can keep it and manage it ourselves. [We’re hopeful of] get a little more attention with him here.”

As an event driver, Dyer plans to keep tabs on My Last Lee and hopefully welcome him home for a second career with her when he’s done on the track.

Southampton’s Igloo Energy in liquidation after loss of 226 jobs