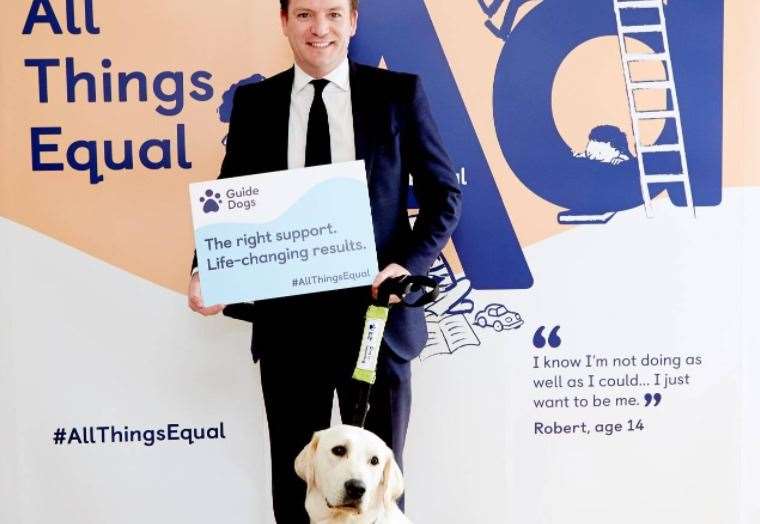 ‘Meeting guide dog Beau is one of the highlights of my time as MP so far,’ says Grantham MP

In the hundreds of meetings I’ve had as an MP, I’m not sure any have been so enjoyable as meeting Beau, an impeccably trained guide dog who visited parliament as part of the ‘All Things Equal’ campaign run by the charity Guide Dogs. I have used this column for the past few weeks to highlight the great work currently being done to advocate for the rights of people with disabilities and so I was delighted to lend my support to the campaign.

Recent research conducted for guide dogs found that 69% of teachers aren’t confident they have the right skills to help children with disabilities, including those with visual impairments, reach their full potential.

This is reflected in the outcomes of visually impaired children, who lag significantly behind their peers in academic achievement, resulting in only a quarter of visually impaired people gaining employment. The essential role of specialist professionals needs to be prioritized and increased support provided at an early stage to help prevent young people with vision loss from falling behind.

May is local and community history month, so I took it a step further when I visited Flag Fen Archaeological Park in Peterborough in April with my parliamentary colleague Paul Bristow, MP, to learn more about our Bronze Age predecessors and see incredibly well-preserved artifacts for thousands of years.

We are blessed with a rich local heritage, and I encourage readers to visit some fantastic places such as the Grantham Museum and Woolsthorpe Manor this month.

To be appreciated, our historic buildings must be preserved, and we had good news for heritage this week with confirmation that work to restore the roof of Skillington Church is now complete after being targeted during a series of lead flights. A significant amount of funding came from last year’s Culture Recovery Fund, which has now helped remove this community landmark from the endangered heritage register.

Over the past month we have had the £150 council tax rebate roll out, and I was delighted to read that 29,000 people have now received this support in South Kesteven. This follows the announcement in March of an additional £5million for the Lincolnshire Household Support Fund, a third of which is earmarked to support families with children and another third dedicated to pensioners.

While support is certainly welcome in the short term, it’s important not to lose sight of changes that can have a positive long-term impact. For example, I was delighted that following consultation, proposals were published last week to reform regulation and allow the UK insurance industry to invest billions of pounds in future UK infrastructure.

The start of May also saw the release of the latest update on the Government’s commitment to recruit 20,000 additional police officers by March 2023. This target is now on track to be achieved with over 13 000 new officers across the country, with 200 joining Lincolnshire Police, which is one of the first two forces to meet its allocation target.