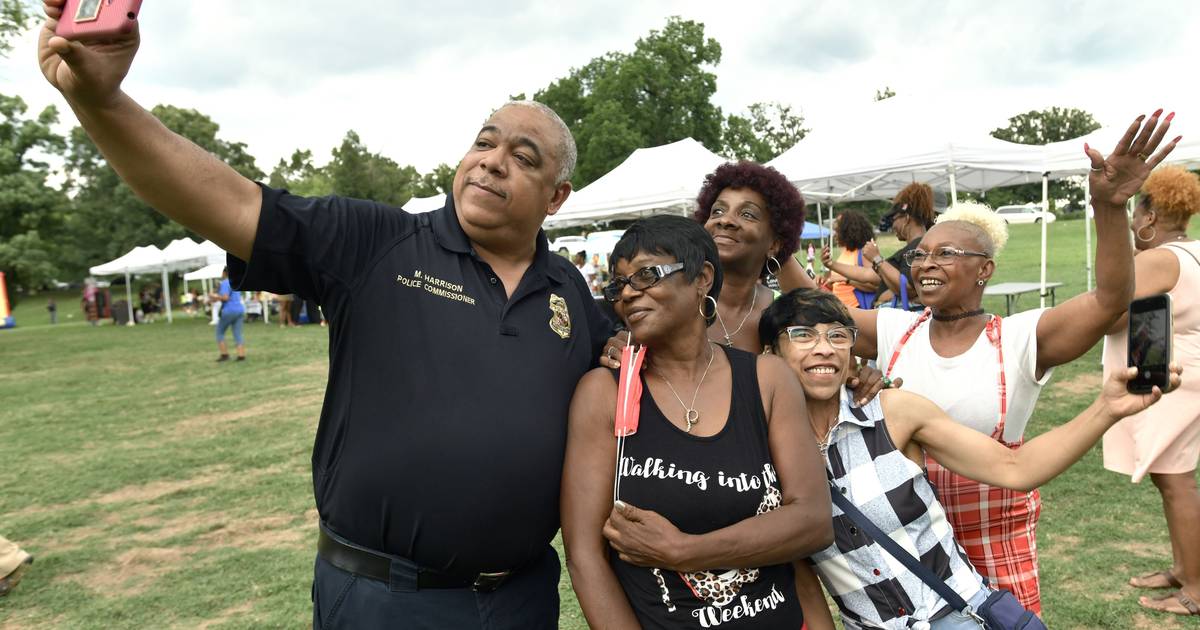 An intoxicating pulse of dance beats led Roosevelt Brown to park his car on his return journey through Clifton Park on Sunday afternoon.

The pounding music, a fast mix of disco and soul, drifted from a park stage where six DJs spun records as part of an annual event hosted by nonprofit Hug Don’t Shoot. directed by Val Jenkins. Brown stopped by to see the stage for the “Christmas in July Music Fest” homecoming giveaway and continued her journey back to Broadway East with a bag of non-perishable food and toys for her granddaughter.

“I was lucky enough to walk past it,” said Brown, a longtime Baltimore resident who was hoping to buy a Hug Don’t Shoot t-shirt to promote the organization in his community. Holding a green plastic bag containing food, he added: “There are more people in the neighborhood who could use this aid.”

Jenkins, who started her nonprofit in 2017 after hearing about a fatal shooting in Baltimore, likes to change the theme of her annual event. This year’s Christmas party in July included donations of food and household items separated into red and green plastic bags. Children lined up to choose toys spread out on a table. Parents followed behind, bags of goods slung over the shoulder like Santa Claus.

Hug Don’t Shoot’s mission is to bring positivity and a sense of peace to every neighborhood in Baltimore, Jenkins said. She runs the organization herself and largely on her own dollar. It’s not easy to plan events big and small, like the Sunday party at Clifton Park. Jenkins relies on a network of approximately 200 volunteers.

Dressed in a hot pink bodysuit and rainbow stickers, Jenkins beams with joy. She greets the handshake greetings and heads straight for the hug.

For someone who is often called upon for support, Jenkins has recently experienced personal challenges and loss herself. She underwent major surgery after being diagnosed with cancer and her mother died last week. She continued to plan non-profit events – including an elementary school fashion show and a makeover for elderly women living in a senior center – from her hospital bed and while organizing his mother’s funeral.

Grief is abundant in Baltimore, where more than 200 people have been killed in shootings this year, including at least two people killed over the weekend.

Demand is high for a shoulder to lean on, a listening ear or just a hug. Every time Jenkins thinks about leaving her nonprofit, someone calls her back. Two weeks ago, Jenkins met a woman who told him she was planning to kill herself until she randomly met Jenkins a few months earlier. The woman told Jenkins her hug made him reconsider, Jenkins said.

Like the nonprofit Hug Don’t Shoot, house music is known for its uplifting message, as well as its euphoric sound. It was created by legendary Chicago DJs for a predominantly black and queer nightclub audience. Although house music has been around for decades, it has returned to mainstream popularity with recent dance albums like Beyoncé’s “Renaissance” and Drake’s “Honestly, Nevermind,” on which he sampled, without credit, the local artist Rye Rye and DJ Blaqstarr’s 2007 track “Shake it to the Ground.

Brand started DJing in Baltimore in the early 1980s when he was 10 years old at a Chuck E. Cheese teen party, he said.

“Baltimore has a rich house music culture. And the best house DJs on the planet,” he said.

Get the latest news as it happens and find out about other must-see content with our free news alerts.

Even though Baltimore’s house scene has a loyal following, there are few places to go since Paradox, an iconic Russell Street club, closed in 2016, said Robert Hector III. Hector, who grew up in Baltimore, is a “head of house” who donates and operates generators for home shows.

Young and old marched and danced past the bandstand in Clifton Park and under a group of trees. Gray storm clouds rolled through the park, kicking up leaves that swirled around revelers dancing in the warm breeze.

“It’s the spirit of Baltimore,” said Mayor Brandon Scott, who attended the event with Police Commissioner Michael Harrison. “I’m happy to be here as mayor and as a Baltimorean.”

Ujimma Masani was driving through the park on her way to Hamilton when she was drawn to the booming tunes and the line of cars flanking the bandshell. Masani decided to stop with her daughter and granddaughter, who picked out a toy from the toy table.

“Look what they gave him!” Masani’s daughter said, placing a box of sparkly shoes in a cart as her granddaughter jumped to the beat.