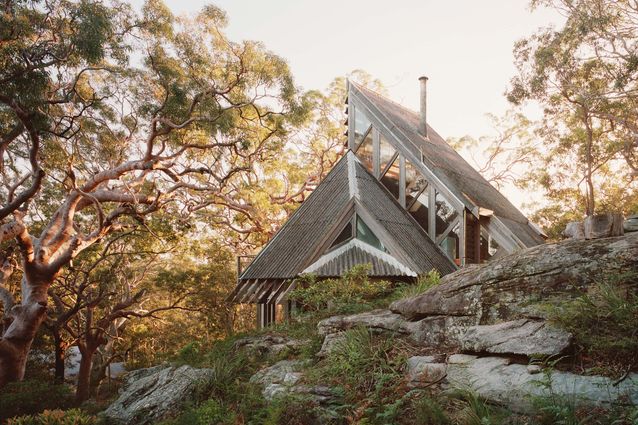 The story of Lobster Bay House is as much about its architect, Ian McKay, as it is about its client, famed photojournalist David Moore. McKay and Moore’s lives were intertwined, both professionally and personally: as colleagues, they shared offices in North Sydney, while McKay was also stepfather to Moore’s children. Lobster Bay House, completed in 1972 and considered one of McKay’s finest residential designs, marks the evolution of the relationship to that of client and architect. Designed as a vacation home for Moore and her children, it is an intricately designed shelter that continues an elemental occupation of a dramatic rock site.

McKay (1932-2015) was part of the Sydney School, a group that celebrated the use of common and natural materials and sought architecture that reflected the local environment and the character of the landscape. He established his own practice in 1960 and his early career included a four-year association with Philip Cox. Their collaboration resulted in two Sulman Medals, awarded to public buildings by the New South Wales chapter of the Australian Institute of Architects: St Andrew’s Presbyterian Church in Leppington in 1963 and the CB Alexander Presbyterian Agricultural College in Tocal in 1965. After McKay and Cox left their separate ways, McKay continued to pursue residential design throughout his career.

Moore was no stranger to the Sydney School of Architects. Early in his career he spent time in the studio of famed photographer Max Dupain and later his own work covered architectural, commercial and now iconic images of Sydney’s foreshore and harbour. Moore used to take his four children camping in Sydney’s North and South and over the years and with the increase in camping gear, surfboards and boogie boards he has decided to seek a more permanent bush retreat.

The eventual site for the house was found by McKay and purchased by Moore in 1968. Located two hours north of Sydney and bordering Bouddi National Park at Pretty Beach, the site straddles a ridge above Lobster Beach overlooking Broken Bay. Moore was conscious of his role as guardian of the preserved bush block and its established forest of angophora costata trees. In keeping with his desire for shelter in the bush, his mandate to McKay was to create a building similar to an “insect sitting on a rock”. Early iterations of the design, with indoor bathrooms lined with sleeping quarters, were rejected, and the final design would have been guided in form by Moore himself. The result was a layout with a main living space flanked by a kitchen and terrace, flanked by bedrooms and bathrooms that fan out through the rock. McKay solved this in near-perfect symmetry, moving the children’s bedroom into a loft above the central saloon – a tiered suspended structure of berths accessed at either end by pipe ladders with wooden steps.

The house is perched on a rocky outcrop. With its roof wings folded down to resist the prevailing southwesterly winds blowing down the hillside, the building strongly evokes both a tent structure and its entomological origins. Symmetry is only broken at key moments to distinguish entry points. The bridge gives way in one corner to a large angophora, which is now protected by a balustrade but was originally bounded by a bench seat, wrapped throbbingly around the perimeter of the chest. These contacts with nature are continually maintained at Lobster Bay House. A series of stone steps, individually put in place by Moore, lead up from the access road to the back door (although it is used as the main door). The prominent, steeply pitched roof is the main exterior form of the building, and its distinctive skin of corrugated asbestos-cement sheeting is now covered in lichen, allowing the house to blend seamlessly into the weathered sandstone rocks of the site. Later, when the dangers of asbestos fibers became known, McKay considered this choice of material his only regret in executing the project, its beauty associating uncomfortably with its dangerous heritage.

While the exterior of the building focuses on shelter and protection, the interior is cozy and quiet, lined with plywood, western red cedar, and sawn Oregon beams. The building is entirely defined by its structure: two wooden trusses supported by an “A” frame arrangement. The “A” frame is flanked by the two wings, which accommodate the symmetrical layout of the bedrooms and bathrooms tucked below. Lovingly built by local builder, Peter Velling, and foreman/carpenter Jack Coster, the house – originally supposed to be built in six weeks – was completed in a year, from 1971 to 1972.

Once inside Lobster Bay House you know how considered and complete the building is. Deceptively simple in plan, it has an intricate section to suspend the loft structure. The arrangement of windows and hatches along the canvases of the farmhouse creates unexpected spaces and moments at every turn. The quality is typically Japanese in the consideration of the assemblies and the hierarchy of the wooden elements. Deleting one item would apparently render the whole thing incomplete and unsubstantiated.

When Moore decided he was ready to part with the property, his children came together to support his care while continuing the family’s use and patronage of the home. Inside, the walls are covered with found objects salvaged from Lobster Beach, gathered together and nailed in place. The portraits on hangers allude to rainy day activities during summer vacation. A charcoal drawing covers the original location of the angled chimney flue, which was removed due to the impossibility of walking underneath and its tendency to fill the room with smoke. The richness brought inside by years of family use makes you understand the desire of the Moore children to remain its guardians. They, in turn, have spent many years solving maintenance issues, solving road access issues and diverting storm water to ensure the protection and longevity of the property.

It is a building that few would dare to build today: small in size, sitting lightly in its bushscape, facing the expected views and offering minimal comfort. It is as much about what is built as what is not built. However, it is mostly about experience. You feel the unevenness of the rocks (and the weight of your runs) as you climb towards the house. At night, hidden under the wings of the building, you hear the wind shake the treetops and are awakened by the cacophony of birds whose house of branches is inside. The house connects its inhabitants to the land it sits on, allowing them to experience the bush while camouflaged in plain sight.

The prominent, steeply pitched roof is the main exterior form of the building, and its distinctive skin is now covered in lichen, allowing the house to blend seamlessly into the weathered sandstone rocks of the site.

Going from homeless to owner is possible thanks to Poverello House, BofA – GV Wire