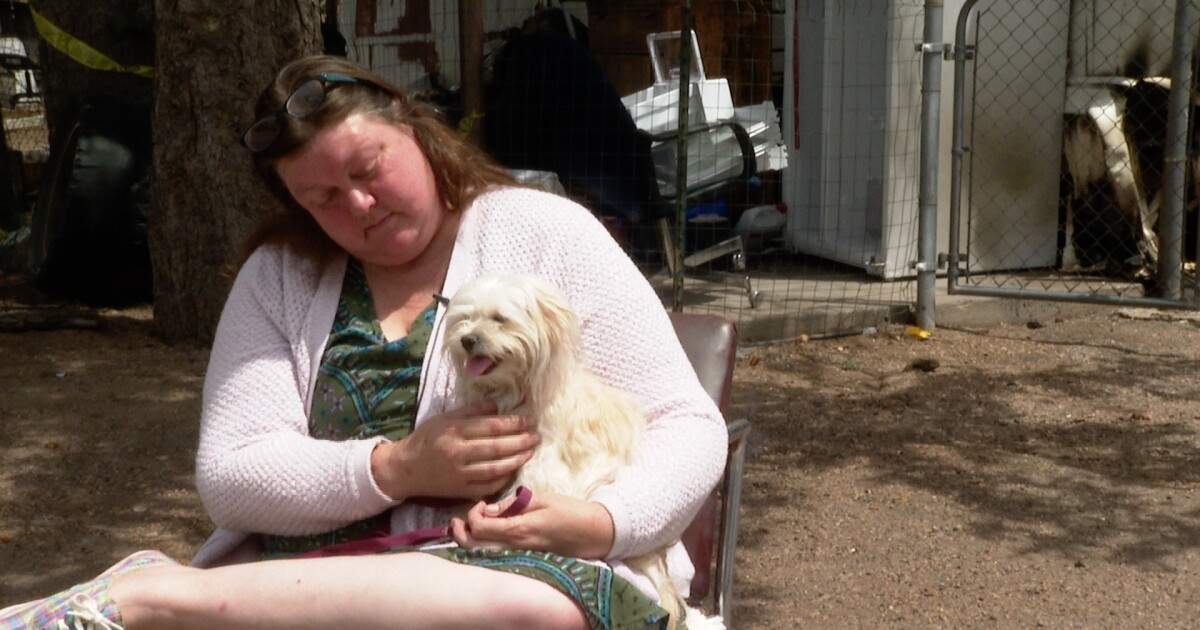 Carmina Lacomb’s house, which she rented, was one of eight that were a total loss after the fire. She lost everything in the house but has since found her dog who was abandoned as she fled the flames.

Lacomb told News5 she was sleeping in her bedroom when the fire started.

“I was in my room trying to take a nap, and I heard and felt what sounded like a lot of overhead fireworks, and a lot of popping and popping,” Lacomb said.

Lacomb says that’s when she came out to see what was going on. Within minutes, if not seconds, things got worse.

“I got to my door, opened it, looked out the door and could see a huge cloud of black smoke. I heard a whoosh sound and a flame shot up in the middle of the black cloud, took the burning tree, took the burning neighbor’s roof, then headed for my door at home,” Lacomb said.

Lacomb said as she quickly grabbed some stuff, one of her dogs got away. She immediately ran outside after the dog and when she returned home, she was engulfed in flames.

“We kept backing up because there were a lot of sounds of explosions and flames. A policeman told me that I had to get out of the park now. I let a firefighter know at the end that my little dog was still stuck in there,” Lacomb said.

First responders first told reporters they rescued a dog covered in soot. Turns out the dog’s name was “Little Bits” and Lacomb was the owner.

“She’s amazing. She was in the fire until they confined her to my house. They found her, I think, under my living room table, in the same place as my purse, from what I understood when they released it,” Lacomb said.

Lacomb found Little Bits a day after the fire. She says Little Bits is two years old and has a cough from smoke inhalation, but she’s fine.

“She and I are each other’s emotional support animals right now. She has my back. I have her back,” Lacomb said.

The only thing left was Lacomb’s purse, with her ID and other important cards and a few small items in her desk drawer.

“Everything else is a loss. It’s awful,” Lacomb said. “I’m mostly tired, not too badly though. I think we are doing well. Everyone did well, that’s the most important thing.

Lacomb hopes to move into a new home by the end of the week, but for now she is staying with her daughter who lives in Colorado Springs.

Lacomb said the clothes on her back, which she wore today, were donated by the community. She says she also received dog crates and supplies, and the Humane Society of the Pikes Peak Region helped collect Little Bits. She also received help from the American Red Cross.

To contact the family or help with a donation, you can contact Lacomb’s daughter, Andrea. Her phone number is 719-492-6983 or email [email protected]

The Colorado Springs Fire Department determined the cause of the fire to be accidental.