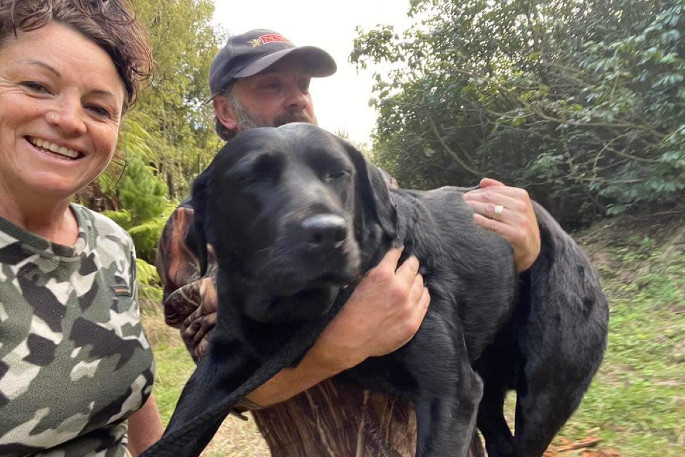 A dog that went missing following a car accident on State Highway 29 in the Kaimai Range on Tuesday has been found alive but injured.

A family friend announced the news on Facebook on Wednesday afternoon.

“Found by an amazing woman, Brenda Crook, who searched all day! We can’t thank you enough, you are a blessing during a terrifying time.”

Earlier, the dog was seen running on the Kauri track on the Kaimai range.

“We searched and searched and left food, owners clothes and his dog blanket at the sign,” Brad wrote earlier today. “I hope she finds it and someone spots her.”

Brad and family friends who were involved in a car accident on the Kaimai Range on State Highway 2 on Tuesday afternoon appealed on social media for help in finding the family dog ​​who went missing after the ‘accident.

“[Ils]just ran their truck down the Kaimai Range on their way home from vacation, their family dog ​​was thrown from the vehicle as it rolled and disappeared somewhere in the Ranges,” Brad wrote on his Facebook page.[They}havejustrolledtheirtruckdowntheKaimaiRangeontheirwayhomefromholidaytheirfamilydogwasthrownfromthevehiclewhilerollingandismissingsomewhereintheranges”writesBradonhisFacebookpage[They}havejustrolledtheirtruckdowntheKaimaiRangeontheirwayhomefromholidaytheirfamilydogwasthrownfromthevehiclewhilerollingandismissingsomewhereintheranges”writesBradonhisFacebookpage

“All are well and on their way to Tauranga Hospital but if people could share her photo with local groups in case she is spotted I will also call the local pound etc.

Emergency services attended the scene of a car accident which occurred around 3.40pm on Tuesday. A car with a trailer attached ended up on its roof halfway up the Kaimai range on the Matamata side.

Brad shared the family’s thanks and joy that Faye was found by Brenda Crook.