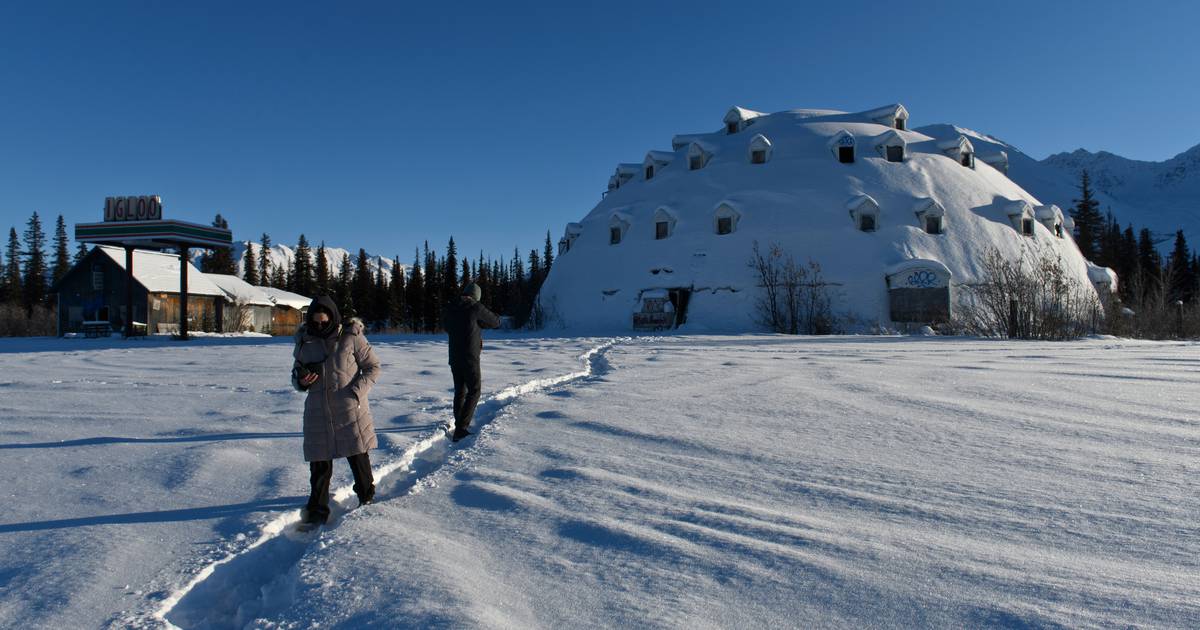 The Parks Highway igloo has been a landmark for decades. Will it ever be open for business?

Curious alaska is an ongoing feature fueled by your questions. What do you want to know or what do you want us to investigate about life in Alaska, the stories behind the news or why things are the way they are? Let us know in the form at the bottom of the story.

Question: What is the history of the giant igloo on the Parks Highway? Has it ever been a successful business, and who owns it now? Will it ever be demolished?

Perhaps no structure in Alaska has captured the imaginations of road travelers like the snow-white dome at the north end of the Matanuska-Susitna Borough. But the one-of-a-kind building is no closer to completion than it was decades ago, when its builder sold the property, giving up on his dream.

At present, the iconic structure along the George Parks Highway is empty and vacant. But the current owner of the igloo at Mile 188.5 says that could change.

Inside the spherical building, one recent morning, caramel-colored wood creaked under your feet. A draft forced a back door to moan. The snow piles up in snowdrifts under the open windows. And a trail of golden morning sun crossed the ground floor.

The stoppage of progress left the building in a growing state of disrepair: windows were boarded up or smashed, graffiti pierced the snow outside, shattered plasterboard and rubbish was strewn over the foundations in concrete inside.

Yet despite the trash cans, the igloo shows its meticulous construction. Once inside, one can imagine a small, lively winter haven, guests dressed in puffy puffer jackets, rosy cheeks from recent ski or snowmobile rides, bowls of steaming soup against a setting sun afterwards. midday.

But the building, about 23 miles south of Cantwell, remains unfinished, quiet except for a chuckling crow nearby, a few people peering around, and the occasional cars and trucks. going up and down the Parks Highway.

Tim Douglas, 30, and his mother, Sharon Cope, 63, in Alaska for two weeks from Philadelphia, were taking photos that morning. Douglas said he was struck by the quality of its preservation – much of the wood appeared to be free from decay.

The two wondered aloud why the building had never become a hotel or a resort.

Brad Fisher, 63, the current owner of the building, can explain. He has long dreamed of transforming the igloo into the resort and hotel it was once designed to be.

Fisher, owner of Mat-Su-based Fisher’s Fuel, ran the gas station next to the igloo for a few years. But as the price of fuel rose, it became harder and harder to do anything other than break even. Since there is no electricity on the property, they had to run everything using a generator – a business that turned out to be expensive.

â€œThat’s when we kind of had to put the idea on the back burner,â€ Fisher said. “(I) always dreamed of going back up there and doing something, but the money wasn’t there and the next thing I knew I was old.”

Fisher, who has owned the property for over 20 years, is unlikely to own it for a long time to come. He hopes to sell it by the end of the year. Under a new owner, the structure could be completed and functioning, he said from his office some 150 miles south near Big Lake.

Fisher first discovered the igloo while delivering fuel to its original owner, Leon Smith, the man who himself built it from scratch.

Smith worked for the Alaska Railroad and dreamed of turning the structure into a seaside resort. He built the igloo using wood from old railroad camps and operated a gas station there, Fisher said.

â€œHe was just one of those old Alaskans with a lot of energy and a big dream,â€ Fisher said.

Smith was also frugal, living with his wife in a 12-by-12 A-frame behind the igloo, Fisher said.

â€œWhenever he got the chance, he would work on the igloo,â€ Fisher said. “It’s just who he was.”

Fisher said Smith was injured in a fall and couldn’t go further.

Smith sold the igloo a few times, but each time he had to take it back because the new owners couldn’t pay, Fisher said.

This is the reason why Google Maps labels the structure as Igloo City – a previous owner obtained a liquor license under this name for the building with the intention of having more igloos nearby, and the name is stayed even though the owner didn’t, Fisher said.

As Smith’s health deteriorated, he one day approached Fisher at his desk, offering him the igloo, knowing that Fisher could pay.

â€œWhen he sold it to me, he had tears in his eyes,â€ Fisher said. “You could tell he wasn’t ready to give up.”

Fisher said he believed Smith had started building the igloo by the time the highway bridge across Hurricane Gulch was built, which, according to Department of Transportation records, was from 1971.

Fisher said he received a letter from Smith’s daughter at some point after Smith and his wife died.

â€œShe was disappointed at how rough (the igloo) looked, you know, ‘my dad’s dream is rotting away,’â€ Fisher said. “And I called her up and I said ‘I just don’t have the money to do it’ and I felt bad, but it was like, what are you going to do?”

About 20 years ago, Fisher said, he received an estimate to fix the structure and make it sound – adding things like a chimney and stabilizer fireplaces, a sprayed concrete exterior, reinsulation, new windows. – would cost around $ 1.3 million (over $ 2 million in today’s dollars).

Fisher planned to do the job bit by bit as they could afford, with the goal of putting a restaurant and store downstairs.

But that never materialized, and now Fisher is considering two options to sell it, he said.

The property is 38 acres, with a few abandoned cabins behind the three-story igloo, as well as a building that once housed showers and a store next door. A sign above always simply says â€œIGLOOâ€.

â€œIt’s in bad shape right now,â€ Fisher said of the igloo building. The vandals destroyed it, he said.

People rode their snowmobiles on it while others stole wood from the interior. Police once called Fisher to tell him that a group of motorcyclists had built a campfire inside after sneaking in to party.

In addition, after the discovery of contaminated soil from underground storage tanks on the property, common to old gas stations, they had to be spread out and plowed in order to allow the oil to leave, said Bill O’Connell, manager of program at the Alaska Department of Environmental Conservation.

Fisher said he dug up nearly 2,000 meters of earth after discovering the contamination during an environmental scan.

On a recent November morning, the property was covered in snow up to about mid-calf. Curious onlookers like Martin Turza, 39, and Dominika Le Van, 30, from Slovakia, watched the structure as they walked through the crisp snow.

The two were on tour across North and South America and had stopped to look around. Although they headed in the opposite direction, the pair had turned around to see the structure after drawing their attention to the road north to Cantwell.

The structure – with its exposed nails, squeaky planks, and three-story fall hazards – isn’t safe for visitors. Signs throughout the establishment warn “no trespassing”. Large concrete blocks covered the entrances to the front and back, but it proved difficult to outsmart intruders. Next to the front door is an adult-sized hole in the wall. (The Daily News has obtained permission to enter the building.)

The only reason to fix it now would be for lack of novelty, Fisher said.

â€œI don’t think it would be the wisest business choice to fix it,â€ he said. “But if you have the money to waste, this would be a fun project.”

He paid $ 300,000 for the igloo, which he has asked for in the past when he tried to sell it, although Fisher said he would like to get about half of it now.

But Fisher said he thought he would likely sell the property to someone who wanted to turn the place into a place for a cup of soup or a sandwich and preserve the igloo for people to walk around. .

No matter what the next owner has planned, he said, it will be a tough sell for him, just like Leon Smith.

â€œLots of dreams,â€ Fisher said. “But, I think everyone who’s been on it, it’s all been a dream.”

[Correction: A previous version of this story incorrectly reported the mile marker where the igloo is located along the Parks Highway. Itâ€™s at Mile 188.5, not Mile 214.5.]