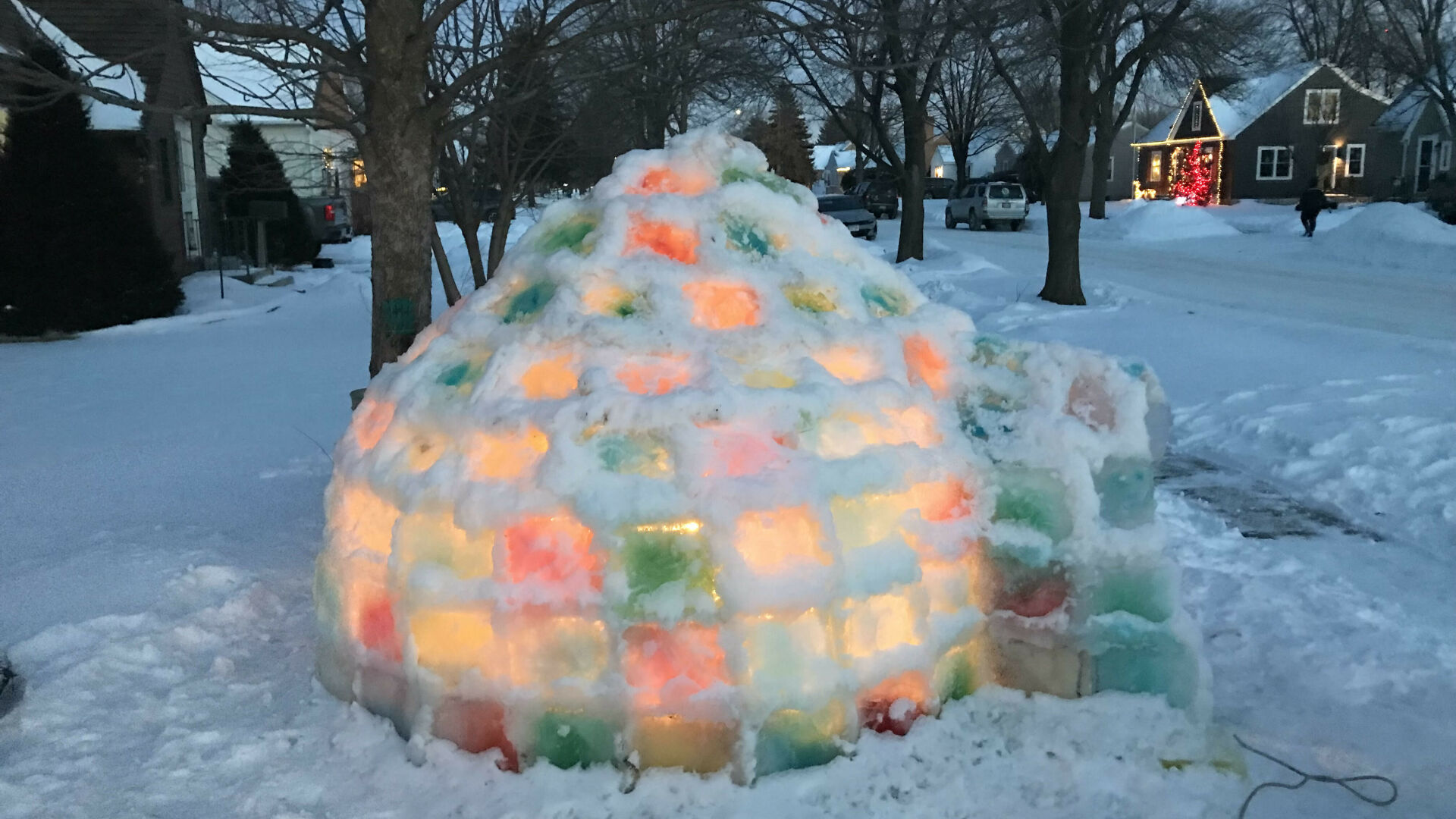 The Rowekamp family steps outside with…

PUT THE ‘BRR’ ON: The Rowekamp family build a colorful igloo to get others outside (photos sent)

In the latest of the East Hill neighborhood’s outdoor getaways, a multicolored igloo magically glows in the Rowekamp family’s front yard. It’s hard to miss when passing by Margaret Street.

The igloo accompanies the artisanal ice rink which already adorns Rowekamp’s residence. And there’s no shortage of outdoor activities for this Eau Claire family. After seeing a rainbow igloo tutorial on YouTube, he asked his seven-year-old daughter Molly if she thought they should make one themselves. Of course, she said yes.

I’m not doing any of this to brag or boast. I just hope people get inspired and do it themselves.

People act like these things that I do are great, amazing things, but the ideas are just, like, right in front of me, on the internet. Anyone could do them. Just be resourceful.

The Rowekamps are already known locally for their efforts to get kids – and adults – outdoors. They’ve created Little Free Sled libraries, stuffed animal zoos during lockdown, lemonade stands in the summer, ‘vandalizing’ local parts of downtown with their chalk-colored creations, and Chad is president of the Eastside Hill Neighborhood Association, which is responsible for the Boyd Park Plus project, which aims to bring improved play facilities – including a new skate park! – with Eau Claire. 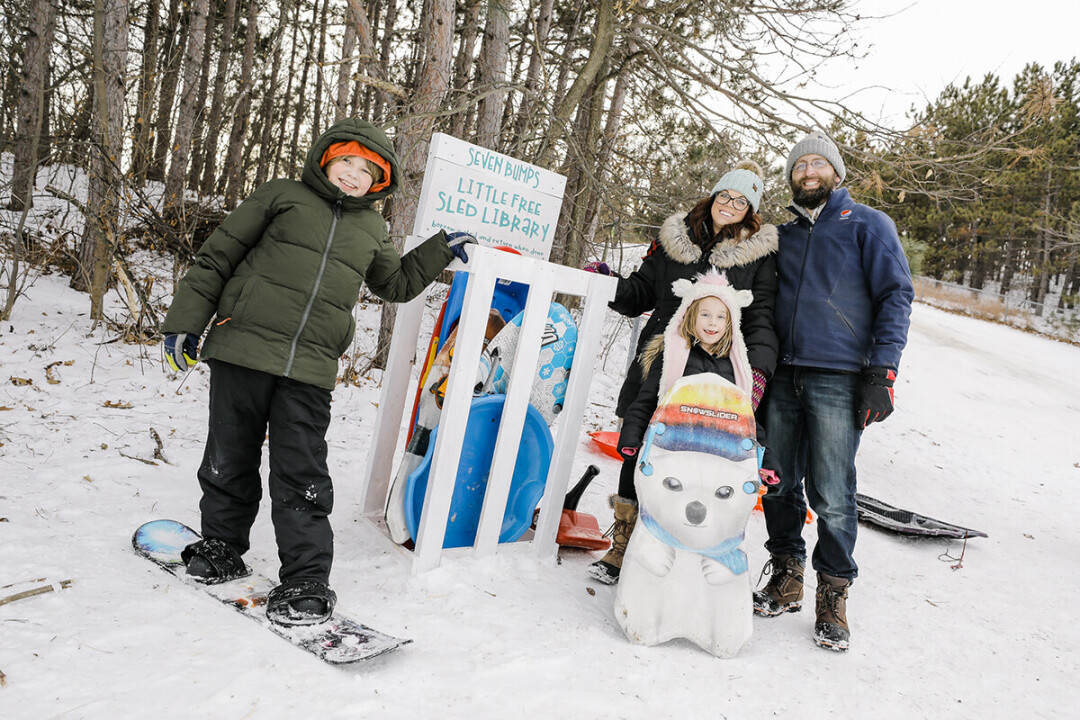 The family also participates in the 1,000 Hours Away Challenge, which attempts to balance the average 1,000 hours of children’s screen time per year with 1,000 hours outdoors. Some take the challenge very seriously, Rowekamp said. Others are more laid back and see it more as a fun goal.

“Serious people, they will get into online debates about the definition of ‘outdoors.’ Does a tent count? Some say yes, some say no,” Rowekamp noted. “Other people are much more relaxed in the pursuit of this goal. I’m probably in the middle of that scale. 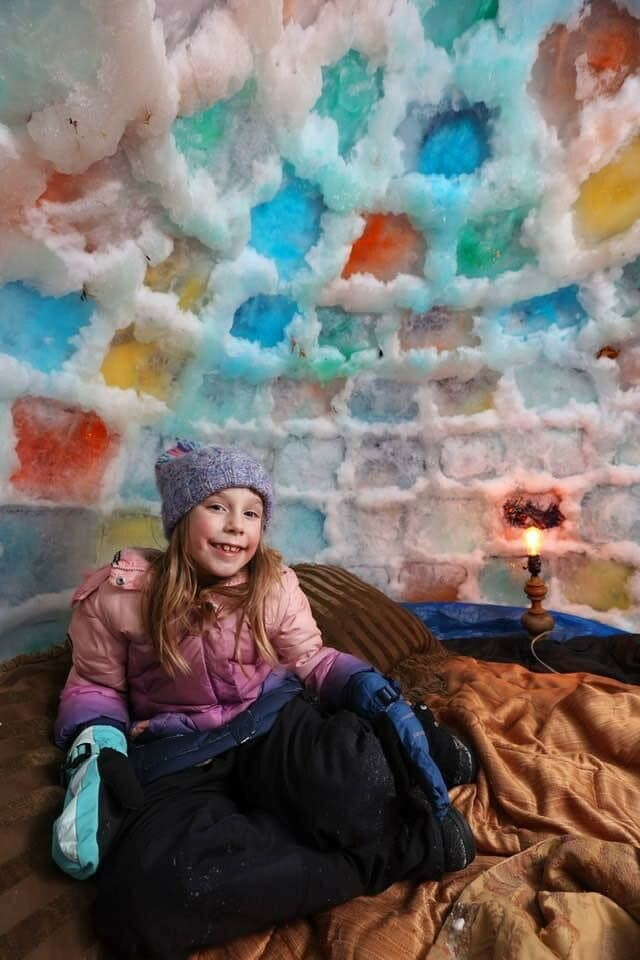 For the Rowekamps, spending more time outdoors is just part of their goal of building community, connection and overall inspiration — and they advocate the little things. It’s all part of building happy, healthy neighborhoods and communities. So the igloo in the front yard. Oh, and a skating rink too.

Family projects are not limited to the front yard, however. Soaring into the air in their backyard is a miniature Ferris wheel, which Rowekamp designed using blueprints he found in the 1920s. Whenever his children Owen and Molly have friends over, he said, they insist on showing the Ferris wheel to their friends. Practically, it’s designed to let the lowest rider spin the wheel while lifting off the ground, but Rowekamp said instead it typically moves at 100 percent Dad Power.

While most of us are impressed that Rowekamp creates challenging and elaborate projects for (and with) his children, he wants people to know that it’s actually a breeze to work out your creative side by outdoors.

“I don’t do any of this to brag or show off,” he said. “I just hope people get inspired and do it themselves. People act like these things that I do are great, amazing things, but the ideas are just, like, right in front of me, on the internet. Anyone can make them, just be resourceful.

As you might have guessed, the main problem is finding time. Rowekamp, ​​always busy, recognized that time had to be sacrificed to be able to spend more outdoors. For example, he admitted that their house was not the cleanest.

AT THE END OF THE DAY, THERE IS A VISION IN MY HEAD OF WHAT THE WORLD SHOULD BE. YOU MUST BUILD THE PLACE YOU WANT TO LIVE.

“I don’t necessarily care about having the cleanest house,” he said. “You have to decide what is important to you. It is important for me to give a good experience to my children. Something they will remember.

Big change comes from small things, Rowekamp said. He joked that he didn’t have a billion dollars to change the world, but the small acts each person can do every day – whether it’s building an igloo or going on a hike – will make many.

“At the end of the day, there’s a vision in my head of what the world should look like,” Rowekamp said. “You have to build the place where you want to live.”

HOW TO BUILD YOUR OWN COLORFUL IGLOO

1. Check the weather forecast. Make sure evening temperatures will drop below 15 degrees Fahrenheit.

2. Lay all of your trays on a flat surface outside. Fill evenly with water.

3. Wait until the top layer of water is slightly frozen. Add 5-10 drops of food coloring. Neon food coloring usually works best, but go for whatever color you prefer!

4. Trace the design of your igloo in your garden. Avoid a sunny location, where your igloo could melt.

5. Shovel the snow to level the ground. Create a diameter between 4.5 and 6 feet.

6. Make your “snow cement”. Mix equal parts of cold water and snow in a five-gallon bucket to a slurpee/snowcone consistency.

7. Once your bricks are frozen, lay a layer of bricks horizontally to create your foundation. Then start building your igloo with the bricks stacked vertically, using “snow cement” between each brick to secure your igloo.

Video: This nine-year-old girl built a rainbow igloo in her backyard