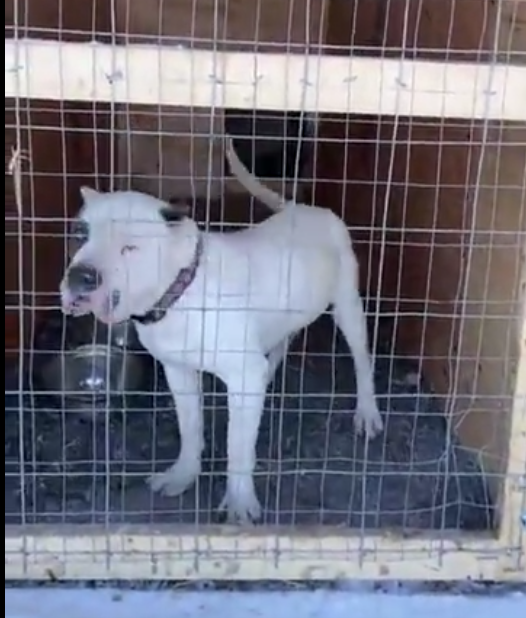 An illegal dog kennel on Lennox and Addington County Road 9 has been the scene of much controversy over the past week. Protests, gonzo amateur journalism, thefts of dogs and equipment, and visits from the Ontario Provincial Police (OPP) have caused stress for people on all sides of the issue.

Zohaib Masood, currently of Niagara Falls, owns the dogs on the property, which is registered to his father, Kushro Masood, of Thorold, Ontario. Young Masood said he has been the victim of unfair treatment, in person and on social media, since the presence of the unlicensed kennel was first publicly revealed.

“I’ve always had dogs…I’ve always loved dogs…So I ended up buying a place in Greater Napanee [for a dog breeding kennel]Masood explained.

When asked why he wanted to raise dogs, American Bullies in this case, for sale, Masood said: “As I said I have had a huge passion for dogs all my life and when you breed you always want to breed for the best. So you always improve your dogs and your lines. That’s why I have a few dogs, isn’t it? As a breeder, people have multiple dogs.

Masood explained that the unlicensed kennel with multiple dogs on site was due to a mistake made by the city. “Before I moved to Napanee, I went into town and talked to who you’re supposed to talk to and asked them what size structure [you can build for a dog kennel], what design. They said, once it’s done, let us know. And we will assess it and give you a license, pretty much,” he said, noting that it happened in December 2021.

Masood said he hired a contractor and they set to work building the kennel, however, a concerned neighbor heard the dogs barking at the site and called the local Society for the Prevention of Cruelty to Animals (SPCA) . According to Masood, the SPCA visited the site, “And they say, ‘Zo, we have…concerns[ed] neighbors.’ And they said, ‘please put a heat lamp on, add some insulation here.’ So all this time I complied with them and what they wanted, because I was new to this, right? I wanted to do it the right way.

Masood said the kennels and pens he built had roofs, were insulated, and he added heat lamps powered by an on-site generator.

Masood has since been going back and forth to Niagara Falls, rehoming the dogs, he said. He left some of the dogs at the site while he did this and explained, “I have someone in Napanee who would come to the location and feed the dogs and water and watch over them.”

Adding to Masood’s ‘nightmare’, he said that since his unlicensed kennel was reported in the media, he has been the victim of unfair social media posts, two of his dogs have been stolen, protesters have entered into the property to live -stream with his dogs, and more recently his generator was stolen.

Indeed, Amber Shaver, an animal advocate from Kingston, says she went to the property to check on the dogs.

Shaver explained his actions by stating, “I love all animals and stand up for all types of animal species.” She explained that she helps Kingston Lost and Found Pets and Boxers Ontario, and actively posts to raise awareness of animal issues on social media. “I have a lot of support online, which is good, and credibility – in terms of the things I post as being accurate information – so it’s just not on a whim…J I decided to go there on Saturday [Feb. 5, 2022] myself – of course, yes, I did trespass, and the OPP know that, I’ve talked to them many times. And I just went and filmed it myself when I was there. And you know, did a live stream to raise awareness and educate the public.

She said from what she had read: ‘I could tell it was a major issue. And these [four] dogs, when I looked at them, there was food thrown on the frozen ground, no water at all, they were raising their paws, shaking, skin and bones, especially this pup who is now missing.

After that first live video, Shaver said she received “thousands of messages” from people online and some of the messages suggested the Masoods were breeding dogs for sale long before they moved to Napanee, or that they had been investigated by Provincial Animal Welfare in the past in other parts of the province.

Shaver said she returned on Sunday, February 6, 2022, to find other members of the public on the site. “They were the ones who immediately took the dogs out,” she said.

Shaver replayed the live video as the group of people gave the dogs bowls of water, which they gulped down, and, she said, “they immediately put the dog in their big SUV [to warm them up]… [our main goals were] give them food, give them water, give them heat, and now and so on…that’s when the SPCA stepped in and also the police.

Shaver said when the group arrived they were shocked to find that only two dogs remained of the four that had been there the day before. Masood said two dogs, an adult female and a female puppy, were stolen overnight, which he attributes to Shaver’s video streaming.

The OPP and SPCA insisted that protesters return the dogs to their enclosures, much to the dismay of some protesters, Shaver reported.

The SPCA called Masood, who was already on his way and arrived shortly after in his big black van. Masood said he was on the property Saturday, had brought dogs home to Niagara Falls, and was returning to pick up the last four dogs in Napanee when he arrived at the site. It was then that he learned that the two dogs had disappeared.

“It’s just been a nightmare,” Masood reiterated. “With back and forth, back and forth. Because Niagara Falls to Napanee is about three hours and 45 minutes. And, and that Saturday, I went to take my dogs and then [Amber Shaver] came to my property and started making videos saying, “Oh the dogs are alone here, no one lives here.” It’s all complete BS because that day I went back to see my dogs and was coming the next day to pick up the rest of my dogs.

When asked where the dogs are now, Masood replied, “I have a huge basement [in Niagara Falls]. So I have, like, separate kennels for them [in the basement]. They’re fine, but in town you can’t have that many dogs. It was very difficult, to be honest.

Masood blames Shaver for stealing two of his dogs, revealing his name to the public on social media, and stealing his belongings, including his generator and extension cords. Both thefts are being investigated by police according to Masood.

For her part, Shaver said she was undeterred and continued to post about Masood and his dogs on social media, but said she wasn’t the one who had it originally. unmasked as owner. She admits she trespassed on the property, but said she didn’t catch the missing dog.

“I accept all the repercussions that may befall me in the future. And I don’t know…otherwise why am I here on this Earth if I can’t help abused animals?

It’s a developing story with more to come.