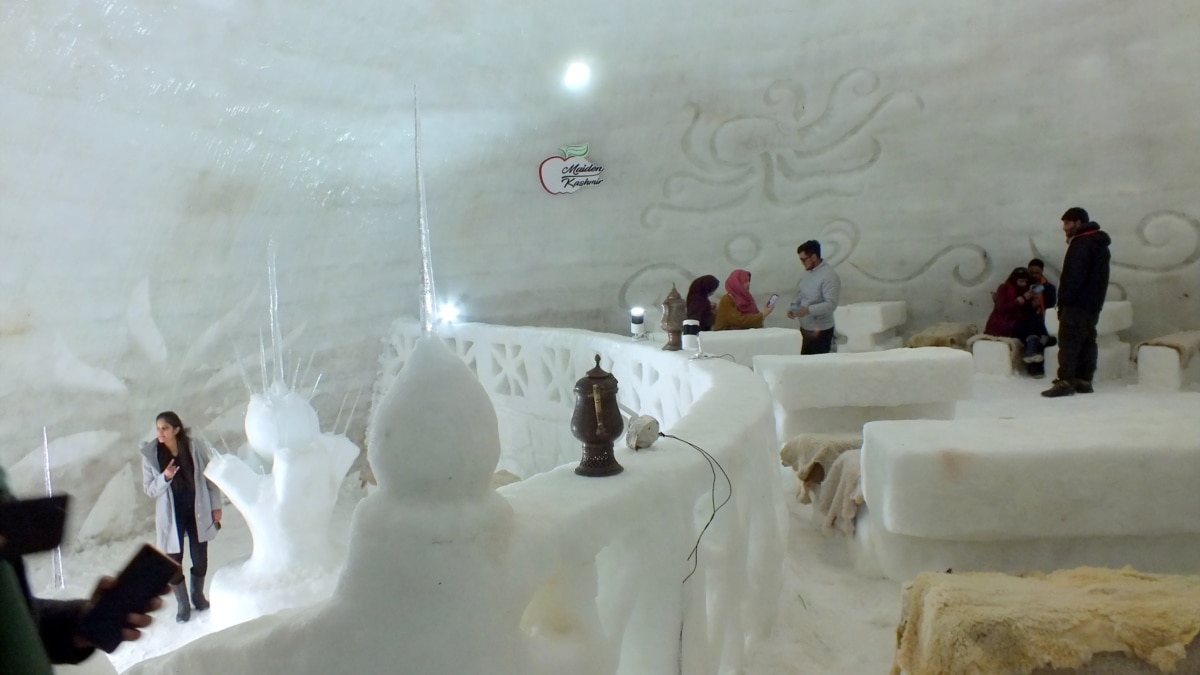 GULMARG, INDIA – For a unique dining experience, travelers will want to visit the world’s largest igloo cafe in Jammu and Kashmir. But they better hurry, because the 40-seat cafe is set to melt next month.

Owned and operated by the Kolahoi Green Heights Hotel, Snoglu Cafe sits at an altitude of 2,500 meters in the Himalayan ski resort of Gulmarg, 50 kilometers southwest of Srinagar. Its creator, Syed Wasim Shah, says he was inspired by an igloo village he saw while visiting Zermatt, Switzerland, a few years ago.

With a height of 11.43 meters and a diameter of 13.56 meters, the ice and snow structure is easily larger than that listed by the Guinness Book of World Records as the largest of its kind. This one, located in Switzerland, is 10.5 meters high, with an inside diameter of 12.9 meters.

“We have already written to the Guinness Book of World Records to certify our record and they will do so in due course,” Shah told VOA.

The cafe has two sections – one for seating where it serves coffee, chocolate, and snacks, and the other for artwork.

“It took us 64 days, precisely 1,700 man-days to complete: we started on December 3 and finished on February 4,” Shah said. “We employed all the locals to build it, and the snow art was all done by me.”

The cafe became an instant hit with visitors, attracting overflowing crowds among visitors to the ski resort. “We welcome 300 to 400 guests every day,” Shah said. “The numbers could have been much higher, but we charge INR 200 (about USD 3) for entry to control the flow of people visiting us.”

One such customer was Dr. Vaishnavi, a first visit to Kashmir from the eastern Indian state of Orissa, who dined with her husband, Dr. Indrajeetm.

Vaishnavi told VOA she was drawn to the unique concept and impressed by the ambience of Cafe Snoglu, where guests stay wrapped in their winter woolens and sit on sheepskin seat cushions to curl up in. warm up.

Hamid Masoodi, General Manager of the Kolahoi Green Heights Hotel, explains that this is the second year that the hotel has maintained an igloo cafe, which is only possible during the winter season from early December until mid- around March.

“We built one last year with a capacity of 16 people inside the cafe,” he said. In a full season with the largest dimensions of the igloo, he estimates the cafe could serve nearly 20,000 guests.

Shah, meanwhile, has even more ambitious plans for next year.

“As for our future plans for Snoglu, we would be creating a fully-fledged igloo village next year where we would also offer sleeping facilities, in addition to our signature Snoglu Cafe,” he said. .

Hibha Bhat contributed to the report.